What are the trends in company holiday greetings for 2022? 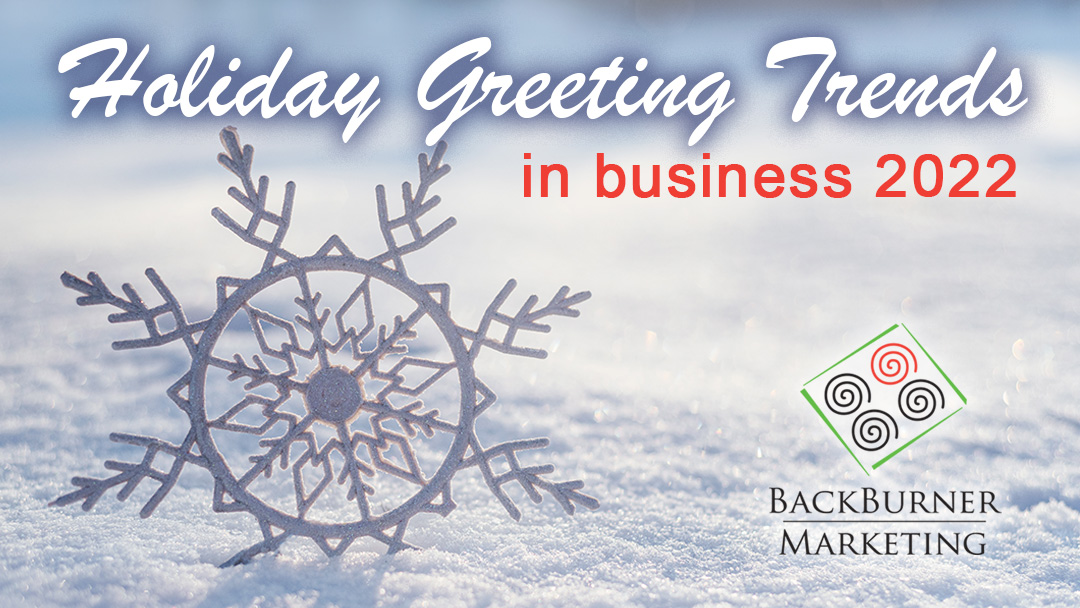 What are companies doing in the 2020s for holiday greetings?

Our agency focuses on digital and inbound strategy. A big part of that is customer communications, an area ignored by more than a few companies even today except during the holidays.

Curious about the norm for busines holiday greetings in 2022, the BackBurner Marketing team surveyed businesspeople via Facebook, LinkedIn, Alignable, and by email. Here is what we learned. We have to admit that some of the results surprised us!

Should your company send a holiday greeting?

As a marketing communications guy, my answer is YES. A qualified yes, but a yes nonetheless.

As one survey respondent put it, “it’s a good time to let special customers know they are special.”

For most people in Western countries, the holidays are a meaningful part of the year. Acknowledging the importance of relationships is essential on both personal and professional levels. A holiday greeting is a perfect opportunity to say, “thanks for your patronage, and we look forward to seeing you next year!”

As Fast Company pointed out in a 2018 article discussing the relevance of holiday cards to modern business, it’s fundamentally a positioning and messaging statement. A digital card is appropriate if you, like us at BackBurner Marketing, are in the digital space. If you are in a more traditional field, it’s probably better to go with a paper-based vehicle.

How it used to be done

Commercially produced Christmas cards (not “holiday cards”) have been with us since the early-1840s. Forget red-and-green, cheerful vibe. This was an austere black-and-white piece by J.C. Horsely for Sir Henry Cole. If it didn’t say Merry Christmas on it, you wouldn’t know it was a holiday card. 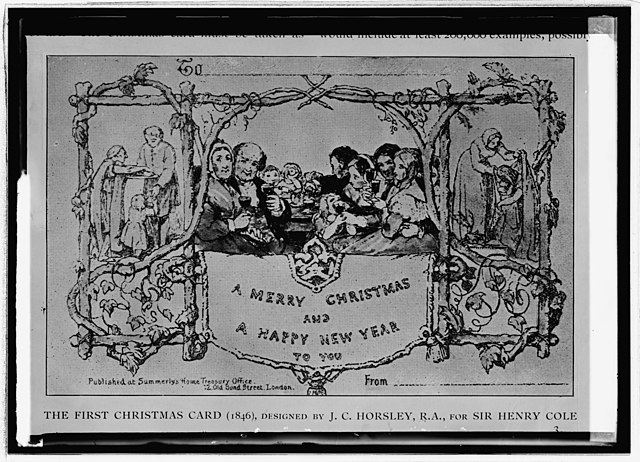 High prices made early printed Christmas cards too expensive for most of the public, but eventually, they caught on in England. The first printed cards appeared in the United States in 1875 and almost instantly were cemented into American holiday tradition.

Business adoption was immediate. The practice of sending company holiday greetings was firmly established by the turn of the 20th Century. At most companies, part of the holiday operations includes picking out cards or commissioning a custom design to mail to patrons and associates. It was considered lousy customer relations not to send one.

So prevalent was this practice that Chambers of Commerce held contests for clever displays made with the holiday cards. Favorite designs were Christmas trees pinned to walls, wreathes taped to doors, and garlands of holiday cards dangling from strings. A decorative ruff of colorful cards usually surrounded doctors’ office windows.

Why did practices change?

Compared to thirty years ago, it’s relatively uncommon to receive a holiday card in the mail these days, whether from a company or an individual. In past decades, most households sent cards to literally everyone they knew. Friends, family, the mailman, neighbors…everyone got a card. Each home received dozens of them each December. Not so much anymore.

The obvious reason for the change is cost. The price of stamps has increased from 20 cents in 1981 to three times that today.

The cost of cards has gone up, too. A lot! A greeting card in the late 1980s could cost anywhere from $.35 to $1.50 for something genuinely extravagant. Today, greeting card prices have risen as fast as gas prices. Nationwide, the average price for a greeting card is $4.50. The least expensive card at my local drugstore was two dollars. And it had no sentiment in it.

People are also out of the habit of writing letters or cards. According to a CBS News poll, 37% of Americans have not written a letter in the past five years. And 15% of adults have never written one! An entire generation of kids has never received a letter, either. My son’s and daughters’ first “snail mail” was college athletic recruitment letters. Both kids found them oddly fascinating, like finding a strange object from the Harry Potter universe. (This rarity makes marketing materials sent through the mail an uncommonly powerful tool today. But that’s for another blog.)

Political correctness and the fear of being miss labeled racist, bigot, misogynist, or cultural appropriator has also put a dent in holiday greetings. Companies are afraid to insult some part of the customer base by sending a card with a message that is deemed “too religious.“ As you will see below, our survey indicates that Happy Holidays was much more common than Merry Christmas. In our survey, 66% of companies send happy holiday greetings over any other message.

A particularly optimistic respondent suggested, “No one is ever offended when they get a gift. No matter how small.” But is that true?

“I understand that Christmas has a religious meaning for a lot of people,” explained Claire, a spa owner who responded to the survey. “But it’s not my personal belief, so I don’t really want to have to see it.”

On the other end of the spectrum, an anonymous respondent said that the aversion to a traditional Christian message in a holiday card is “Woke, cultural Marxist, sterile, risk averse, toxic feminist, nonsense.”

As stated earlier, your holiday greeting is a positioning statement, even if unintentionally.

The holiday greeting in 2022

Who is sending holiday greetings?

Respondents to the BackBurner Marketing survey came from a variety of industries. Here’s a breakdown of the business types.

Most were business owners, though some were management in advertising, marketing, and various customer-facing positions. For larger companies, Christmas messaging usually falls under the marketing department. Some companies split the role between marketing and human resources, which take on external and internal messages, respectively.

As with everything, digital solutions have made inroads. Email is the overall leader for business communication, and it carries most of the holiday greetings.

Most were business owners, though some were management in advertising, marketing, and various customer-facing positions. For larger companies, Christmas messaging usually falls under the marketing department. Some companies split the role between marketing and human resources, which take on external and internal messages, respectively.

As with everything, digital solutions have made inroads. Email is the overall leader for business communication, and it carries most of the holiday greetings. 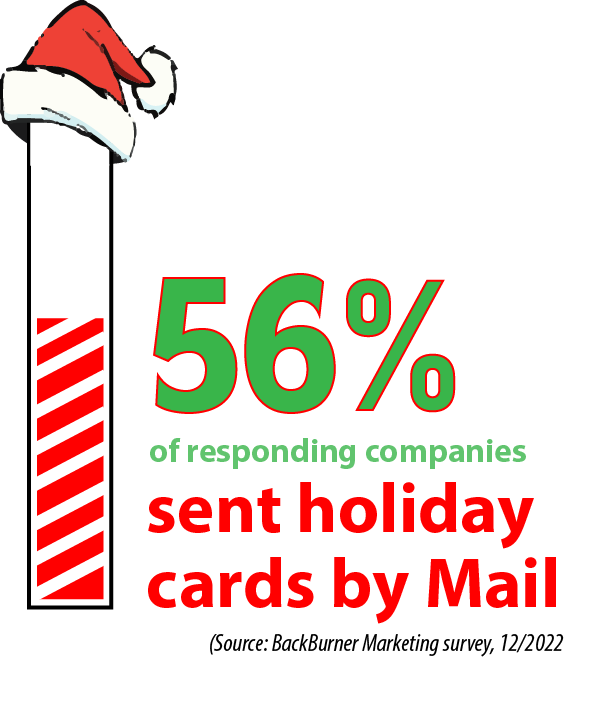 One of the surprises in this year’s survey was using social media as a primary way to send a holiday greeting. Holidays, large and small, are always a big part of communications strategies at BackBurner Marketing. We have never advocated using only social, especially for the December holidays.

Mary Lou Loehr, advertising director at the Rockdale Reporter in Texas, spelled out her publication’s inventive, engaging strategy. “We actually do a Letter’s to Santa insert. Businesses from our area will do their annual Christmas message to their customers in it.” That’s a great use of the company’s product, a newspaper, to leverage the holiday message. It positions the newspaper as a positive part of the community. The Reporter takes it a step further. “I will also post their messages on our Facebook for a larger reach.”

Who gets the message?

Traditionally, holiday greetings are sent using a shotgun approach. The same messaging and vehicle (card, email, etc.) goes to every recipient. Customers and clients are always on the holiday mailing list. Partners, suppliers, and organizations that do business with the company are often included. Some companies have different messages and deliverables for internal and external audiences. Segmentation beyond this is uncommon. While there are no hard-and-fast rules about holiday message-sending, it’s fair to say that most companies try to address everyone that makes their business possible and successful.

For companies sending their holiday sentiments strictly via social media, segmentation is impossible, though specific innate segmentations are built into each social media platform. For example, LinkedIn would target more businesspeople while Facebook would skew toward a middle-aged and older group. Instagram would appeal to the mid-30s and younger crowd, with TikTok targeting the more youthful range. None of that segmentation is absolute and discrete, of course.

When greetings are sent 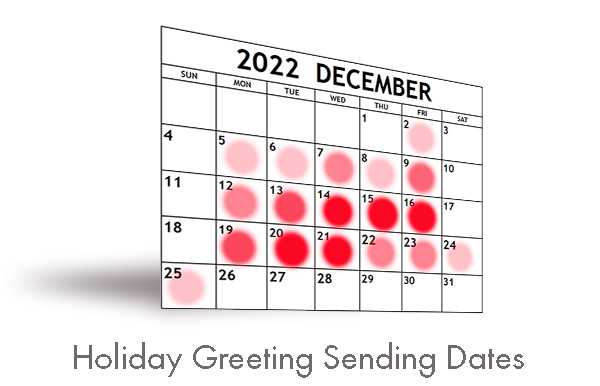 There was no clear “best day” to send a holiday greeting. Some respondents sent as early as December 2nd. The biggest concentration of send dates was from December 12 through the 19th. Those that emailed tended to send later, and those who used the Postal Service. Some are still pending sending. As an email strategist, I suggest sending it on a Tuesday or Thursday, early in the morning! Free advice!

What are they saying?

Not surprisingly, the majority of survey respondents (66.7%) opt for the Happy Holidays theme as their standard message. 44% go with Merry Christmas (or the Irish (Nollaig Shona dhuit!) and Welsh (Nadolig Llawen!) versions included in the survey…okay, I suspect no one used the Irish or Welsh text). 22% send a mix of Hanukkah and Christmas, with one respondent including the pagan/Wicca option of Winter Solstice. This question allowed more than one answer, so the totals do not add up to 100%. 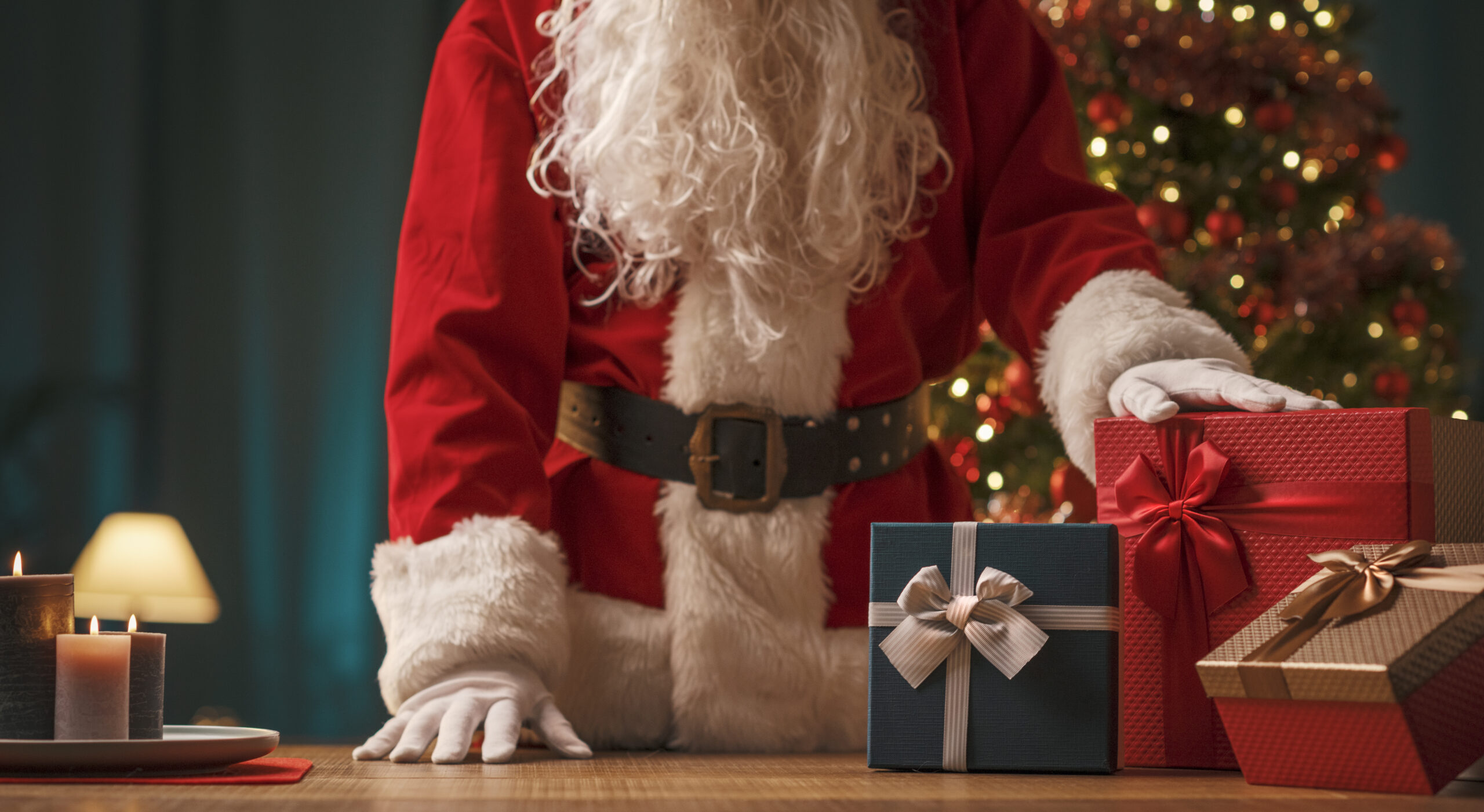 The question that elicited the most diverse responses asked what type of imagery is typically pictured in the greeting. 11.1% of respondents use an industry-related theme, with 1/3 including some form of company identity such as a logo.

Snow is pervasive. Snow and the holidays are inextricably connected, even though much of the United States doesn’t see a white Christmas most years. Nevertheless, more than half of respondents sent cards with snow imagery. My agency is based in a part of Florida where it has snowed but twice in the past 150 years, yet many local companies send snow-themed holiday cards! Christmas trees appeared in 44.4% of our respondents’ greetings, and 1/3 included a wrapped gift. A further 20% including a photo of staff. “We like to show customers who we are,” said Ted, who manages a physical therapy clinic. “PTs deal with people on such a personal, hands-on level that it only makes sense to continue that personal connection with our patients in the holiday card.”

The future of holiday greetings

For the past few decades, most companies and individuals have been trending away from holiday cards sent through the post. Our predictions for the future are:

It’s the thought that counts

A survey respondent wrote, “I can remember when mailing out Christmas cards was so thoughtful and a special Christmas tradition. It was so nice to receive all those cards in the mail with handwritten notes from the sender, given that extra special touch. This is something that has been slowly dying out over the last several years as technology has grown and it makes me sad. I am in technology, just to be transparent.”

Indeed, the shape of holiday greetings has changed over time, particularly in the past few years. However, the reasons why have remained the same. In the final analysis, when it comes to holiday greetings, the message is less important than the fact that a company took time to think of its customers, employees, and partners. In the broadest sense, that’s the true meaning of the season. 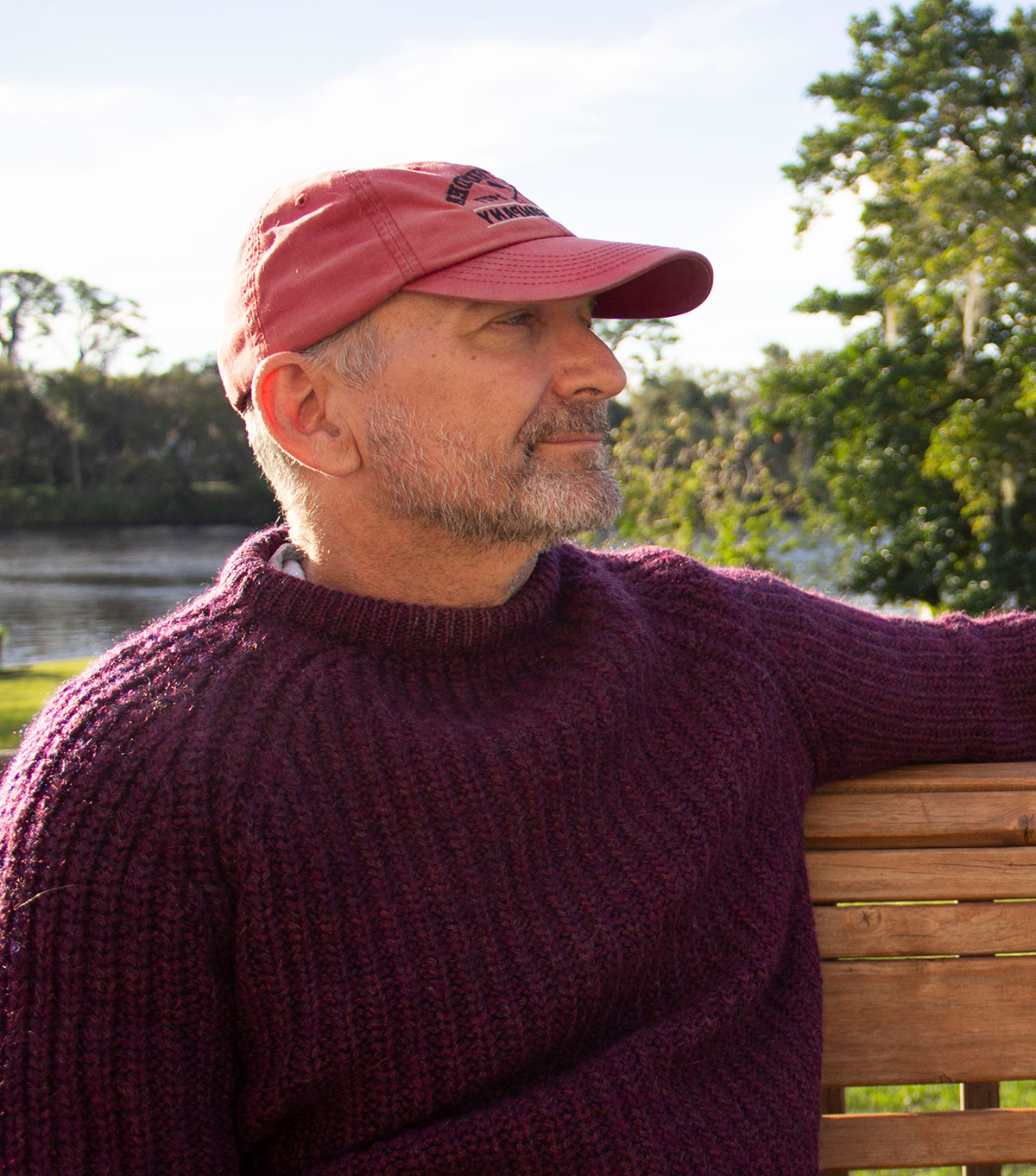 Richard Williamson has enjoyed a three decade career in marketing, advertising, and public relations. Formally trained in graphic design and copywriting, he is a partner here at BackBurner Marketing and founder and lead designer of the Logo Design Group. Find out more about him here or at www.RichardWroteThis.com.

Richard is available for brand and marketing consulting, business coaching, and as a fractional Chief Marketing Officer.

Scheudle a consultation with BackBurner Marketing!